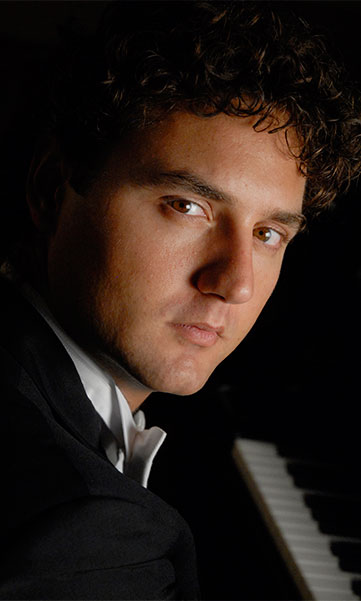 “This young Italian pianist is not only a formidable technician but also an original musical thinker whose performances seek to illuminate, after unconventional ways, the true nature of the repertoire he plays” – Jeffrey Tate (2004)

“In my opinion Giuseppe Albanese is one of the best young Italian pianists who have emerged in recent years. He performed the Mendelssohn Piano Concerto in D minor with me on two occasions, and I was very impressed with his musicianship, pianism and expressive talent. It stands out in my memory.” – James Conlon (2004)

One of the most sought-after Italian pianists of his generation, Giuseppe Albanese has performed throughout Italy and abroad, with praise for his performances as “ravishingly beautiful” and “truly superlative”. First prize winner at Premio Venezia, the most important national piano competition in Italy, Albanese also won the first prize at London 2003 Vendome Prize International Piano Competition, headed by Sir Jeffrey Tate and defined by Le Figaro as “the piano world’s most prestigious award”. He was also awarded the special prize for the ‘best execution of contemporary music’ at the 54th Busoni International Piano Competition in Bolzano.

In his native country, Italy, Albanese is a regular guest in the most important concert hall seasons, such as Gran Teatro La Fenice in Venice, Teatro di San Carlo in Naples, Teatro dell’Opera and Auditorium Parco della Musica in Rome and the Arena in Verona. He is one of the few pianists invited to be present in major theatre seasons throughout the country, from Trieste, Milan, and Genoa, to Bologna, Florence, Bari and Palermo, with such orchestras as the Orchestra Sinfonica dell’Accademia di Santa Cecilia, the Orchestra del Teatro San Carlo, the Orchestra Sinfonica G. Verdi, I Pomeriggi Musicali.

Before his debut on Deutsche Grammophon, Albanese has recorded several albums since 1998, ranging from the Fantasies by Schubert, Chopin, Schumann and Skrjabin to the first performance of Simoni’s Europe Piano Concerto with the Târgu-Mures Philarmonic.

His CD “1900 – Yearbooks of 20th Century Piano, dedicated to the year 1900 and containing music by Skrjabin, Szymanowski, MacDowell and the world’s first recording of Bartók’s Variations – was proclaimed ‘CD of the month’ from Suonare News (a leading Italian classical music publication) and awarded 5 stars in both artistic and technical appraisal from the magazine Amadeus (December 2001). Albanese’s most recent recordings are En plein air, containing works by Mendelssohn, Weber, Tausig, Debussy and Bartók, and Pour le Piano, featuring works by Debussy, which was recorded for the Italian Magazine Amadeus on the 150th anniversary of the composer’s birth.

He is now Piano Professor at the Rossini Conservatory in Pesaro. 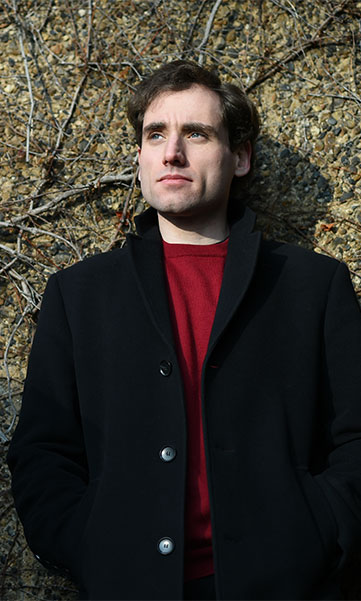 Born in 1984 in Moscow, Boris Giltburg moved to Tel Aviv at an early age, studying with his mother and then with Arie Vardi. In 2013 he won first prize at the Queen Elisabeth Competition, catapulting his career to a new level. In 2015 he began a long-term recording plan with Naxos Records.

Having taken the second (and audience) prize at the Rubinstein in 2011, Giltburg has appeared with many leading orchestras such as Philharmonia Orchestra, Israel Philharmonic, DSO Berlin, Frankfurt Radio Symphony, London Philharmonic Orchestra, Swedish Radio Symphony, Danish Radio Symphony, St Petersburg Philharmonic and Baltimore Symphony. He made his BBC Proms debut in 2010 and has toured regularly to South America and China, and has also toured Germany with the Orchestre National du Capitole de Toulouse. He has played recitals in leading venues such as Leipzig Gewandhaus, Tokyo Toppan Hall, Bozar Brussels, London Southbank Centre, Louvre, and Amsterdam Concertgebouw.

Having initially appeared on the EMI Debut label some years ago, in 2012 Giltburg released an acclaimed CD of Prokofiev War Sonatas on Orchid Classics, earning him a place on the shortlist for the critics’ award at the Classical Brits. His Romantic Sonatas disc (Rachmaninov, Liszt, Grieg) followed in 2013. His first solo releases on Naxos (Schumann and Beethoven) prompted enthusiastic reviews, and his latest Rachmaninov CD was named Gramophone’s Disc of the Month:

“this vision will place him among the truly memorable Rachmaninov interpreters, an elect including Moiseiwitsch, Horowitz, Kappel, Richter and Cliburn. His originality stems from a convergence of heart and mind, served by immaculate technique and motivated by a deep and abiding love for one of the 20th century’s greatest composerpianists.” (Gramophone, May 2016)

Boris is an avid amateur photographer and blogger, writing about classical music for a non-specialist audience. 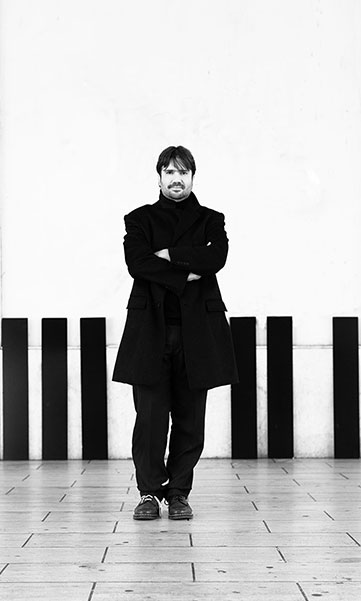 In recital, he has been engaged by most of the prominent musical associations of his native country, including Serate Musicali and Societa dei Concerti in Milan and Festival Pianistico in Brescia and Bergamo. Mr. Cabassi has played concerts in Austria, China, France, Germany, Japan, Portugal, Russia, Scandinavia, and Switzerland, highlighted by appearances in Salzburg’s Mozarteum, the Gasteig in Munich, and Rachmaninoff Hall in Moscow, Roque d’Antheron, Louvre, Salle Gaveau, Tiroler Festspiele, Forbidden City Hall and NCPA in Beijing. In spring 2012 he performed with superstar etoille Roberto Bolle, Massimo Murru and Svetlana Zakarovaa atTeatro alla Scala. In 2013 he performed in Athens and in Beijing with Sylvie Guillem.

He was featured prominently in the film documentary about the Twelfth Van Cliburn Piano Competition, In the Heart of Music, which was aired by PBS stations in all major U.S. markets. In 2008 the Italian channel “Classica” dedicated him a special in their series “Note-Voli”, and in the following years two other documentaries. Appreciated for the warmth and sincerity he brings to his performances, Mr.Cabassi has been popular with U.S. presenters and audiences since he was declared a winner of the Twelfth Van Cliburn International Piano Competition in June 2005. In the following years he played in 35 US states.

Davide Cabassi’s debut CD for Sony-BMG records, Dancing with the Orchestra, featuring works by Bartók, De Falla, Ravel, and Stravinsky, was released worldwide in the spring of 2006 for which he won the Italian Critics Award for “best debut recording of the season.” This season of 2007/2008, Mr. Cabassi recorded “Brahms Concerti” and the Schumann Concerto with the Haydn Orchestra under the direction of Maestro Gustav Kuhn for Col Legno label in Italy, and produces in the United States “Pictures” and “Escaping” on Allegro label. In 2010 he recorded (first not cuben pianist) the 40 Danzas Cubanas by Cervantes. In 2011 he will release two more albums for Concerto Classics, one cd for the magazine “Amadeus” (with his quintet, Five Lines) In 2012 he recorded a monographic cd with Janacek piano music, and the Rossini’s Petite Messe Solennelle. In 2013 his debut for DECCA (Mozart Sonatas) was released with great success. In the next year he will record Beethoven Sonatas for DECCA.
After graduating from Milan’s Giuseppe Verdi Conservatory, where he was a student of Professor Ponti, Mr. Cabassi spent several years as one of the few select students at the International Piano Foundation in Cadenabbia, Italy, taking masterclasses with Karl Ulrich Schnabel, Dmitri Bashkirov, Leon Fleisher, Rosalyn Tureck, and William Grant Naboré. He is a faculty member of Conservatorio Nicolini in Piacenza: his students are regoularly winners of the most important international piano competitions. He’s artist in residence at the Col-Legno festival in Lucca and at the Tiroler Festspiele Erl, he’s member of the Artistic Commitee of Busoni Competition and he’s artistic director of the season “Primavera di Baggio” in Milano. 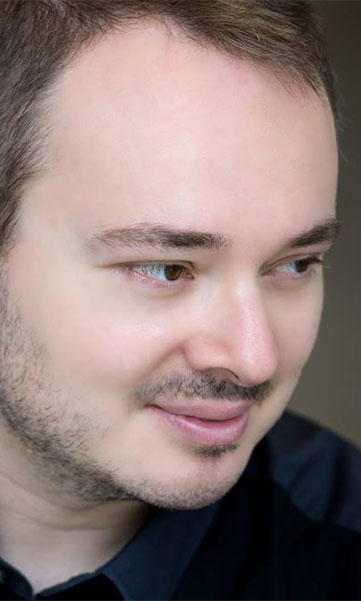