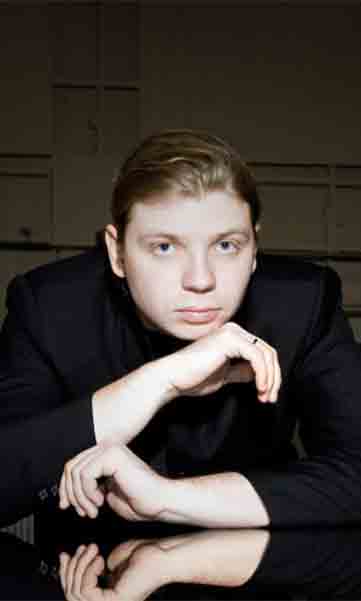 Denis Kozhukhin’s playing is characterised by an extraordinary technical mastery balanced by a sharp intelligence, calm maturity and wisdom. Kozhukhin has that rare and special gift of creating an immediate and compelling emotional connection with his audience.

As a recitalist, recent and upcoming highlights include returns to the Concertgebouw’s Master Pianists Series, Vienna Konzerthaus, Cologne Philharmonie, Wigmore Hall, Verbier Festival and London’s International Piano Series, as well as solo and chamber recitals with Jörg Widmann and Emmanuel Pahud at the new Boulez Saal in Berlin during its opening season.

In 2015, Kozhukhin signed an exclusive recording agreement with Pentatone. His debut recording for the label (Grieg Piano Concerto and Tchaikovsky Piano Concerto No. 1 with the Radio Symphony Orchestra Berlin and Vassily Sinaisky) was Gramophone Editor’s Choice and Disc of the month in Fono Forum and Stereophone. His next recording of solo Brahms was released in early 2017.

Born in Nizhni Novgorod, Russia, in 1986 into a family of musicians, Denis Kozhukhin began his piano studies at the age of four with his mother. As a boy, he attended the Balakirev School of Music where he studied under Natalia Fish. From 2000 to 2007, Kozhukhin was a pupil at the Reina Sofía School of Music in Madrid learning with Dimitri Bashkirov and Claudio Martinez-Mehner.

Upon graduating, he received his diploma personally from the Queen of Spain and was named best student in his year and twice best chamber group with his own Cervantes Trio. After his studies in Madrid, Kozhukhin was invited to study at the Piano Academy at Lake Como where he received tuition from amongst others Fou Ts’ong, Stanislav Yudenitch, Peter Frankl, Boris Berman, Charles Rosen and Andreas Staier. He completed his studies with Kirill Gerstein in Stuttgart. Kozhukhin has also been awarded 1st Prize at the Vendome Prize in Lisbon in 2009, and 3rd Prize at the Leeds International Piano Competition in 2006. 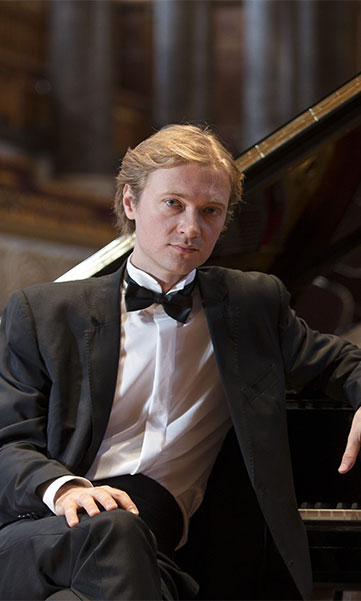 Praised for »artistic sophistication far above the ordinary« by Frankfurter Allgemeine Zeitung, Canadian pianist and composer Dmitri Levkovich was born in the Ukraine.

Both of his parents are pianists and his father is a renowned composer. Dmitri’s performances have taken him all over the world. He has appeared at Carnegie Hall, Beijing’s National Center for the Performing Arts, Theatre des Champs Elysees, the Great Hall of Moscow Conservatory, the Great Hall at the Gulbenkian Foundation in Lisbon, the Warsaw Philharmonic Hall, and the Mariinsky Theater’s Concert Hall in St. Petersburg.

He has collaborated with conductors Valery Gergiev, Vladimir Spivakov, Jahja Ling, George Pehlivanian, Markus Stenz, Sebastian Weigle and performed with orchestras, such as the Cleveland Orchestra, the Utah Symphony, the China National Orchestra, Gulbenkian Orchestra and Frankfurt Radio Orchestra. Many of his performances have been broadcast on television and radio stations. Dmitri was invited to take part in numerous Music Festivals that included Deer Valley, New Contemporary Piano Faces at Mariinsky, Gergiev Festival in Rotterdam, Salzburg Whitsun, the International Keyboard Institute and Festival (New York City) and Ravello.

Dmitri feels fortunate to have studied piano with the great Sergei Babayan for 11 years. However, his first professional degree was in composition (Curtis Institute of Music). His compositions have been performed by orchestras in the United States and in Europe. The style of his music is described in the Philadelphia’s Broad Street Review – »…the musicians could jump right into the heartfelt melodies and big emotional surges of Levkovich’s slow movement.« He also enjoys teaching. His experience in teaching began as an assistant to Sergei Babayan. Since then, Dmitri has successfully taught piano and chamber music master classes at various universities across the world and also served as a jury member in various piano competitions. Dmitri makes his home in Manhattan, New York. 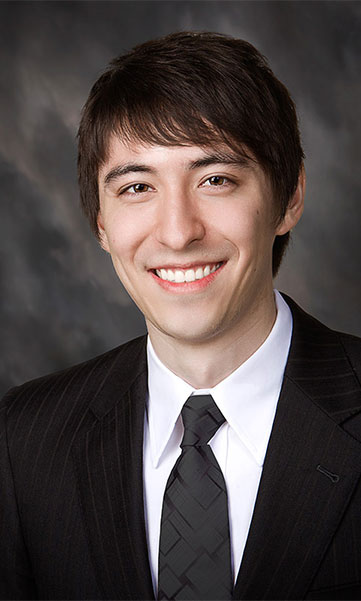 His 2011 debut album received a rave review in American Record Guide, which pronounced it “a hidden gem,” attesting to its “perfect blend of lyricism and romantic passion,” “huge romantic sound, and bold melodic vision” and proclaiming that he “plays the dickens out of the Stravinsky [Three Movements from Petrushka]” and “plays Chopin’s Preludes with more poise and vision than most pianists who have recorded them.” Fanfare affirmed the enthusiastic reception, naming the album “a very desirable disc” and citing “Kennard’s mastery of Chopin’s idiom,” its “impression of complete effortlessness” and “emotional responsiveness.” The review characterized his playing as “full of life and sparkle,” summing up: “while I wouldn’t necessarily say that Kennard outclasses Ashkenazy, Rubinstein, Moravec, Ohlsson…in this repertoire, he surely equals them.”

Sean’s first teacher was Ellen Masaki. He received a Bachelor of Music from the Curtis Institute of Music in 2004. In his final year at Curtis he won the institute’s Sergei Rachmaninoff Award, given to one graduating pianist each year. After subsequent work with pianist Enrique Graf he received a Master of Music from the Juilliard School (studios of Jerome Lowenthal and Robert McDonald) and spent the following two years in the studio of Richard Goode. He recently completed the residential portion of the Doctor of Musical Arts degree program at Yale University working with Boris Berman.

Praised in the Wall Street Journal as “a most mature and sensitive pianist” and named one of the “up-and-coming talents” in classical music by Musical America, Chinese-American Di Wu continues to enhance her reputation as an elegant and powerful musician. Her concerts have taken her across the globe, charming audiences from East to West with her “charisma, steely technique, and keen musical intelligence” (Philadelphia Inquirer) and her “fire and authority” (Washington Post).

Now based in New York, Di made her Philadelphia Orchestra debut in 2009. Her 2015-16 itinerary include a return to Carnegie Hall, performing Shostakovich Piano Concerto No. 1 with the Chamber Orchestra of New York, as well as a debut at Jordan Hall in Boston, performing Rachmaninoff Piano Concerto No. 3 with Longwood Symphony Orchestra. Other concerts include ree-engagements with North Carolina Symphony, Harrisburg Symphony and Flint Symphony Orchestra.

Di made her professional debut at the age of 14 with the Beijing Philharmonic, and has since appeared with orchestras such as those of Cincinnati, Fort Worth, New Jersey, Pittsburgh, Seattle and National Symphony Orchestra in the U.S., and abroad with Hamburg Philharmoniker, Shanghai Symphony Orchestra, and Singapore Symphony Orchestra, to name a few. Some of the most eminent conductors have collaborated with Di including Charles Dutoit, Christoph Eschenbach, Miguel HarthBedoya, Yu Long, Ludovic Morlot and Carlos Miguel Prieto, among others.

In addition to orchestra engagements, Di is also sought after as a recitalist. In New York, she made debuts at Carnegie Hall and Alice Tully Hall at Lincoln Center, and has also appeared in such music centers as Chicago, Houston, Los Angeles and San Francisco, as well as at the Gilmore International Keyboard Festival, Ravinia Festival and the Portland Piano Festival. She is also a frequent performer in Europe and, of course, in major venues throughout Asia.

Her most recent appearance in Tokyo, at an arena concert recorded and released by SonyEpic Records in Japan, took place before an audience of over 11,000. Ms. Wu’s recording of Brahms’ Variations on a Theme of Paganini, Books I and II received praise from Musical America, whose critic wrote “Her account of the Brahms is amazing. She takes all the difficult options (her glissandos are unbelievable!), and she conjures from the piano absolutely gossamer, violinistic textures, joyous humor, and brilliant air-borne tempos.”

Winner of multiple awards including a coveted prize at the 2009 Van Cliburn Competition; The Juilliard School’s Petschek Award; The Virtuosi Prize at Lisbon’s prestigious Vendome Competition; and the winner of Astral Artists’ 2007 National Auditions, Ms. Wu came to the United States in 1999 to study at the Manhattan School of Music with Zenon Fishbein. From 2000 to 2005 she studied at The Curtis Institute with Gary Graffman, subsequently earning a Master of Music degree at Juilliard under Yoheved Kaplinsky, and an Artist Diploma under the guidance of Joseph Kalichstein and Robert McDonald. 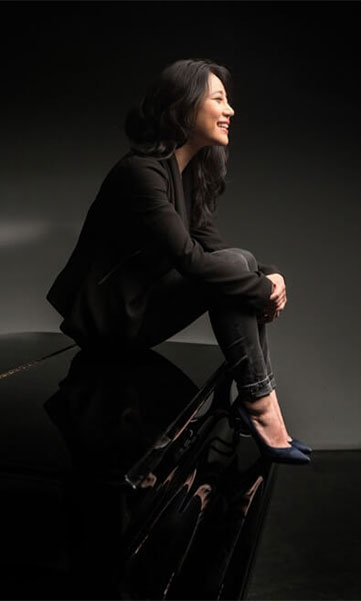 In recent seasons, pianist Zhang Zuo (“Zee Zee”) has appeared with the BBC Symphony, BBC Philharmonic, London Philharmonic, Belgian National Orchestra, Los Angeles Philharmonic, Cincinnati Symphony, Hong Kong Philharmonic and the Shanghai Symphony Orchestra, among others. She has worked with leading conductors including Paavo Jarvi, Marin Alsop and Yan Pascal Totellier and has appeared at some of the top festivals, such as the BBC Proms, Ravinia Festival in the United States and the Beethoven Festival in Poland. Zee Zee has also had success with a series of solo recitals at notable halls around the world, including the Kennedy Center in Washington DC, Lincoln Center in New York, London’s Wigmore Hall and De Doelen in Rotterdam.

An imaginative and electrifying performer, Zee Zee began her musical training in Germany at the age of five. Upon returning to her native China, she became one of the most sought after young artists in the nation, collaborating with leading Chinese orchestras with whom she retains a close link – the 16/17 season sees her as the Artist in Residence with the Shenzen Symphony Orchestra touring Europe. Having completed her piano studies with Dan Zhao Yi at the Shenzhen Arts School , Zee Zee was invited to continue her artistic development under the mentorship of Nelita True at the Eastman School of Music and Yoheved Kaplinsky and Robert McDonald at The Juilliard School, where she won the coveted Petschek Piano Award.  Zee Zee was awarded first prizes at China’s 1st International Piano Concerto Competition, the Gina Bachauer International Artists Piano Competition in America, and the Krainev International Piano Competition in Ukraine; she was also a prizewinner at the 2013 Queen Elisabeth Competition. She has studied at the Peabody Institute with Leon Fleisher, and continues to receive guidance from Alfred Brendel.

2015-16 marked the final season of Zee Zee’s two-year residency with the BBC’s flagship New Generation Artists program. During her residency, she gave a number of orchestral concerts and recitals in London and around Great Britain. As an NGA artist, she has appeared with the BBC Philharmonic and BBC Ulster Orchestra with whom she performed a live, televised concert for the BBC Proms at Royal Albert Hall. She also debuted with the Warsaw Philharmonic, performed the Liszt Totentanz and Beethoven 1st Concerto with the Minnesota Orchestra, and performed the Beethoven 1st Concerto with Paavo Jarvi in Parnu, Estonia, at the Jarvi family festival. She also performed with the Shanghai Symphony Orchestra and Charles Dutoit.

Zee Zee has been described as “full of enthusiasm and glamour, radiating the vigor of youth” (Chinese Gramophone).  Her interpretations and communicative abilities have been praised as “taking us to another reality…bright, expressive and moving to the extreme” (Belgischer Rundfunk) while her creative maturity has been hailed as “a powerful, passionate and compelling representation of pure artistry” (Los Angeles Times).

Aside from her solo career, Zee Zee is a passionate chamber musician and has recently recorded her first album for Deutsche Grammophon with colleagues Esther Yoo and Narek Hakhnazaryan.