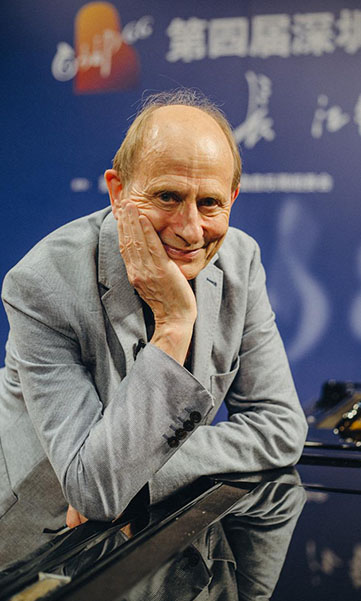 Christopher Elton was born in Edinburgh and received most of his musical education at the Royal Academy of Music in London, where he achieved the unusual distinction of gaining the Academy’s highest performing award – the Dip. RAM – as both pianist and cellist.

He was a prizewinner in several British and international piano competitions, playing and broadcasting regularly as a soloist as well as a chamber musician. At the same time he worked as a freelance cellist with several major London orchestras.

Christopher Elton’s international recognition has come as a result of the success of his students at the Royal Academy of Music. They have won numerous international awards, including first prizes at the Van Cliburn, London “World” International Piano and “Top of the World” Competitions, as well as the Shenzen and Montreal International Piano Competitions. Further recent accolades include laureates in the four latest Leeds finals as well as Tchaikovsky, Leipzig (Bach), Dublin, Shanghai and various others. Many of his students are now recording artists, among them Freddy Kempf, Yevgeny Sudbin, Joanna MacGregor and Benjamin Grosvenor.

While the main focus of his work is at the Royal Academy in London, Mr. Elton has also been much in demand overseas both as a professor and as a jury member of international competitions. Within the last few years he has given masterclasses in the USA, Japan, Israel, Korea, Australia, Taiwan, Hong Kong, Spain, Germany, Ireland and Vietnam. He was a jury member in Moscow (Tchaikovsky), Dublin, Leeds, Bolzano (Busoni),Vienna (Beethoven), Shenzen and China International, Santander and for the 2017 Van Cliburn International Piano Competition in Fort Worth, USA. During recent years he has also given recitals in the UK, USA, Ireland, Spain, Australia and Vietnam.