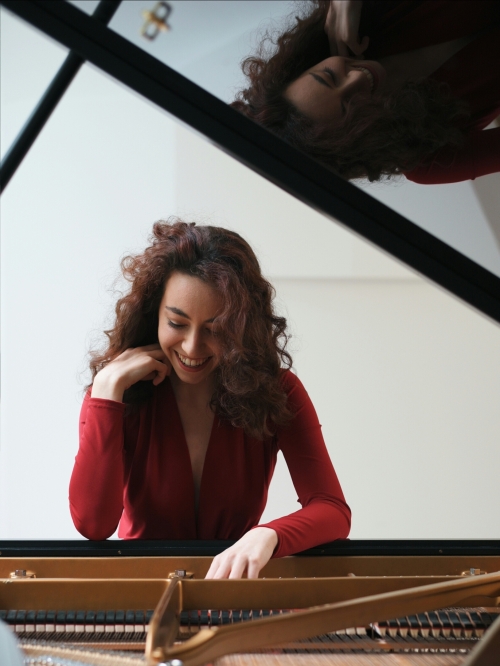 25-year-old Alice Burla, called an “extraordinary talent” by the New York Times, stands out for her colorful, spiritual and intelligent approach to music. Her strong desire to share music and her exquisite artistry have led her to perform in venues such as Carnegie Hall, Royal Concertgebouw, Teatro la Fenice, Palau de la Música Catalana, Salle Cortot and the World Economic Forum.

Most recently Alice has become a laureate of the Sydney International Piano Competition and the Concours Musical International de Piano Montréal. In the last year she was awarded the 2020 Migros-Kulturprozent Prize, the Kiefer Hablitzel │Göhner Music Prize with the special Prix Collard and the Schenk Stiftung Soloist Prize, which will lead to her debut with the Argovia Philharmonic this fall. She is also a laureate of the 2019 Concours International de Piano “Antoine de Saint-Exupéry” and the 2019 Royal Birmingham Piano Festival Competition.

Alice currently studies with Claudio Martinez Mehner and Anton Kernjak at the Musik Akademie Basel, where she received her Bachelor and Soloist Master degrees.

This summer Alice appeared as soloist and chamber musician in the DAVOS Festival; upcoming performances include debut recitals in Moscow and Dubai this fall.