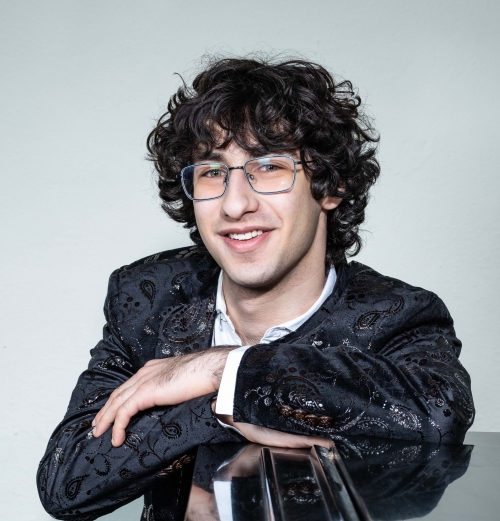 18 year old American pianist Maxim Lando was awarded the prestigious  2020 Gilmore Young Artist Award, and was also named Musical America’s New Artist of the Month. He first received international attention in 2017, appearing on the piano bench alongside Lang Lang to perform the parts intended for Mr. Lang’s injured left hand at Carnegie Hall’s Gala Opening Night. Chick Corea joined them for an unprecedented three-pianist version of Gershwin’s “Rhapsody in Blue” with the Philadelphia Orchestra led by Yannick Nézet-Séguin. The collaboration was chronicled in The New York Times.

Maxim won First Prize and four special prizes at the 2018 Young Concert Artists International Auditions. He opened the 2019-20 Young Concert Artists Series with recital debuts in the Peter Marino Concert at Carnegie Hall’s Zankel Hall, and at the Kennedy Center’s Terrace Theater. His sold-out debut program included Liszt’s complete Transcendental Etudes and according to NY Times critic Anthony Tommasini “…he already has what it takes to dispatch it brilliantly.”

As the only American to have been awarded the Gold Prize at the International Television Contest “Nutcracker” for Young Musicians in Moscow, Maxim has received continuous support from the Musical Olympus Foundation over the past several years and is invited often to perform in Russia’s most prestigious halls.

Dedicated to making classical music accessible to his own generation, Maxim Lando has been featured on CNN’s Best of Quest, NPR’s From The Top, BBC Radio 4, Bavarian Radio, Russia’s TV Kultura, The Violin Channel, and WQXR. A proponent of Sing For Hope’s mission, he served as a last-minute replacement for Lea Salonga at its 2017 Gala.

Maxim is a proud alumnus of the Lang Lang International Music Foundation, which has provided him a tremendous amount of guidance and support. He is currently a student at The Juilliard School, where he continues to work with long-time mentors Hung-Kuan Chen and Tema Blackstone.